Know The Darkest Night of MahaShivratri
March 4, 2019 by Madhvi

It means Truth always exists both before & after creation and even when everything is destroyed and as a result, nothing exists. It is unaffected by time, space and other transcendental boundaries. The good persists as long as the truth is, standing always by the side of truth. Beauty is not defined by any external appearance but only by the innate qualities of Truth and Goodness. Satyam, Shivam and Sundaram are the three qualities which completely describe Mahadev or Lord Shiva. 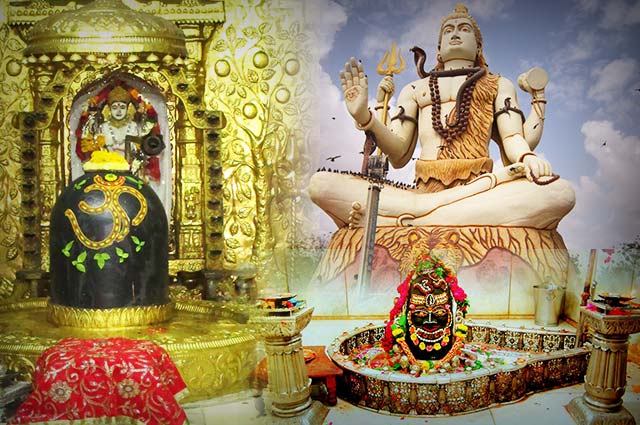 Mahashivratri is considered as the darkest of all nights. This festival signifies overcoming darkness, ignorance and fear. Mahakaal, Bholenaath or Lord Shiva is considered as the destroyer of darkness. The day of Mahashivratri is elucidated by many ancient stories and myth. It is assumed that on this propitious day the great Lord Shiva and the prettiest Goddess Parvati got married. It is said that the Mahakaal (Lord Shiva) Baraat(marriage procession) was the most unique & alluring during the time of their marriage. Groom sides were in their best swag with half-naked bodies, wild animals around, smoking chillum (hookah) and dancing traditionally on loud beats. Mahakaal was decorated with the neck-loop of skulls and with the symbolic snake around. Bride’s family turned very frightened during the time of Mahakaal arrival. This uniqueness defines Lord Shiva who is also known for his heavenly dance of creation, preservation and destruction. The famous mudra of Lord Shiva is depicted in the carvings of Chidambaram Temple, India. To impress Lord Shiva, devotees often practice ‘Natya Shastra’ or ‘Worship through Dance’. This story tells the care-free and distinctive style of Bholenaath. It is also said that unmarried woman fasting on this day would get a groom with qualities like Lord Shiva and the married woman would get the eternality & long life of her husband.

Another story revolves around the day when Lord Brahma and Lord Vishnu involved in one of the biggest quarrel or fight. This so-called argument on ‘higher supremacy’ status has frightened the whole creatures, other God & Goddess. They tried their best to stop them from fighting and causing havoc. Watching this fight, Mahakaal turned very angry and burnt down the Earth with his firepower. The fire was so strong that it would have engulfed the Earth as well as the universe entirely. On this, Brahma and Vishnu initiated to stop the fire from causing further destruction. But they failed to do so. They requested the Shiva to forgive both of them and stop the eternal flame from causing any further destruction. Mahakaal who is known for his kindness & mercy forgive the miscreants, and the universe was protected and saved. Mahakaal is called as the angriest of God, who is the ultimate destroyer. It is believed that entire God & Goddess territory fear Lord Mahakaal, and evil pray him to get the power and strength.

The other story is based on the period of ‘Samudra Manthan’. This period is very best defined in Vishnu Purana, Bhagavata Purana and in the Mahabharat. This is called as the biggest churning of the ocean. On this ‘the nectar of immortality’ originated, the very easily spread poison(halahaal) which could have caused vast destruction. On seeing this, the entire universe trembled with fear. But, the brave and fearless lord Shiva gulped down the entire poison and behelded it in his neck till it turned completely blue. This is the reason MahaShiva is called as Neelkanth- the one who has got blue neck.

The chanting of the prayer in the name of Shiva-(the fearless) removes sin and makes us fearless and strong. ‘OM NAMAH SHIVAY’ should be chanted regularly and on the day of MahaShivratri. On this favourable day, one should make offerings to Shivalingams & Jyotirlingas. People do fastings and meditation to practice the qualities of self-resistant, honesty, non-injury and forgiveness. People sing hymns and praise Lord as well as conduct Jaagraata(full night active prayers) to please Lord Shiva.

This practice is mostly originated from Kashmir Shaivism. They also called Mahashivratri as ‘Harratri’. It signifies social harmony, unity and love. On this day the devotees who successfully please Lord attain Liberation and move towards eternity. This Hindu festival is celebrated all across India and over the territories of Nepal and West Indies. This festival is popular among devotees. Devotees are crowded to nearby Mahadev temples to make offerings to Lord and pray for their complete well being. Om Namah Shivay!

Previous articleNothingness in our Real World

Next article Words Mean Nothing; When Actions Are Opposite.

We use cookies on our website to give you the most relevant experience by remembering your preferences and repeat visits. By clicking “Accept All”, you consent to the use of ALL the cookies. However, you may visit "Cookie Settings" to provide a controlled consent.
Cookie SettingsAccept All
Manage consent

This website uses cookies to improve your experience while you navigate through the website. Out of these, the cookies that are categorized as necessary are stored on your browser as they are essential for the working of basic functionalities of the website. We also use third-party cookies that help us analyze and understand how you use this website. These cookies will be stored in your browser only with your consent. You also have the option to opt-out of these cookies. But opting out of some of these cookies may affect your browsing experience.
Necessary Always Enabled
Necessary cookies are absolutely essential for the website to function properly. These cookies ensure basic functionalities and security features of the website, anonymously.
Functional
Functional cookies help to perform certain functionalities like sharing the content of the website on social media platforms, collect feedbacks, and other third-party features.
Performance
Performance cookies are used to understand and analyze the key performance indexes of the website which helps in delivering a better user experience for the visitors.
Analytics
Analytical cookies are used to understand how visitors interact with the website. These cookies help provide information on metrics the number of visitors, bounce rate, traffic source, etc.
Advertisement
Advertisement cookies are used to provide visitors with relevant ads and marketing campaigns. These cookies track visitors across websites and collect information to provide customized ads.
Others
Other uncategorized cookies are those that are being analyzed and have not been classified into a category as yet.
SAVE & ACCEPT